Lets Play Hypothetical’s re Gaza and Reality’s re Iraq. 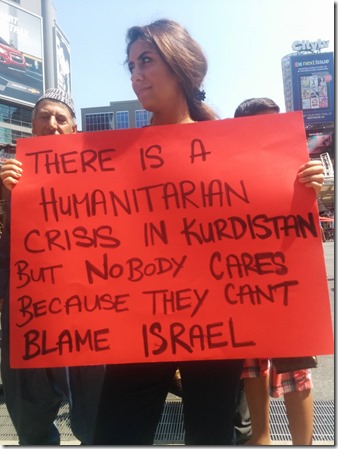 Lets play Hypothetical’s. Imagine that Israel invaded Gaza, burnt down Mosques, desecrated the graves of Muslim Prophets, forced all the young men onto trucks and shot them in mass graves or beheaded them and paraded their heads around on Youtube Clips. No wait there’s more to this hypothetical. Now imagine Israel forced the rest of the men to be circumcised – even against their religion, and also took girls as young as 9 and forced them to marry the Israeli soldiers, also imagine that during this invasion, that some 400 women just disappeared and their families were saying they were taken, raped and killed. Imagine Israel then telling every person who does not become Jewish in their faith – they have 24 hours to leave Gaza or be killed. Imagine the outrage. Imagine the calls for Israel to be invaded and Gaza liberated. Imagine the outcry from the United Nations and the condemnation from leaders around the world.

Now lets play reality. Muslim extremists have done the above and more in Iraq and the world’s media are shamefully silent. World Leaders are shamefully silent. The hypocrisy of the world is sickening. A life is a life whether its a Jewish life, a Palestinian life or an Iraq Sunni Muslim life or an Iraq Christian life. I have to say that I have seen much passion and debate on my FB page over the Israel and Palestinian issue – but not too much said about Iraq. I wonder why.

You may want to read my blog on:

A 5 Minute Briefing on ISIL and the Situation in Iraq.