Home › Uncategorized › Why Peter Pilt Supports the Recognition of Indigenous Australians in the Australian Constitution.

Why Peter Pilt Supports the Recognition of Indigenous Australians in the Australian Constitution. 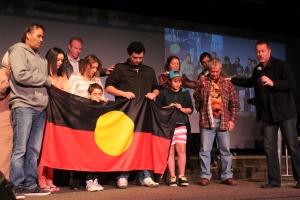 “Today Australia prides itself on being a place of fairness. But our Constitution still does not recognize the first Australians. And it still says in Section 25 that the States can ban people from voting based on their race. It’s long past time that we ensure that there is no place for race discrimination in our nation’s highest legal document.” (http://www.recognize.org.au)

“Removing the discriminatory provisions from our Constitution will have lasting practical affects through the protection of human rights. Recognizing Aboriginal and Torres Strait Islander people in a preamble is largely symbolic, but that does not diminish its importance in any way”. www.humanrights.gov.au

What are the racial references in the Constitution now?

Section 25. For the purposes of the last section, if by the law of any State all persons of any race are disqualified from voting at elections for the more numerous House of the Parliament of the State, then, in reckoning the number of the people of the State or of the Commonwealth, persons of the race resident in that State shall not be counted.

This is an antiquated, redundant and racist section, which reflects past discrimination against Indigenous peoples’ rights to vote.

Section 51(26). The Parliament shall, subject to this Constitution, have power to make laws for the peace, order, and good government of the Commonwealth with respect to […] the people of any race, for whom it is deemed necessary to make special laws.

This section, the so-called “races power”, has been interpreted by the High Court to allow the federal parliament to make laws that discriminate adversely on the basis of race. Parliament only ever used the races power regarding Aboriginal and Torres Strait Islander people.

2) It helps reconciliation between the Indigenous Australians and other Australians

“Building a nation based on respect for the dignity and humanity of the first peoples of this land will form an integral part of moving towards a reconciled Australia.

“There has never really been a moment in the history of our country where there’s been a formal recognition or acknowledgment of the Aboriginal and Torres Strait Islander peoples as the first peoples of this country.”

Achieving a successful referendum will require a united effort. Australians will need to walk together and talk together in order to create a constitution that truly reflects the heart and soul of the nation. In essence, constitutional reform is about reconciling our past, building a solid foundation for the Indigenous and non-Indigenous relationship and looking ahead to a collective future.” www.humanrights.gov.au

Personally, I don’t support the extent of the calls from the Anglican Church of Brisbane who has called for the following.

The Anglican Church in Brisbane has called for constitutional recognition of Aborigines and Torres Strait Islanders.

The Church has made a submission to a panel reviewing the issue.

It recommends changes which would effectively allow Indigenous communities to self-govern.

The Very Reverend Dr Peter Catt says the changes could lead to flow-on benefits including dedicated seats for         Indigenous people in Federal Parliament.

“We thought this was a great opportunity for the nation to move to the next step in terms of recognizing the contribution the Aboriginal and Torres Strait Islander people make to our nation and our culture,” he said.

My concern is that if the change to the constitution went this far, effectively we create two nations within our nation and so something that should be aimed at uniting our nation, could actually cause further division.

In conclusion, we should remove all racially based powers in the constitution. Additionally, if recognition of Indigenous Australians in the Constitution provided a significant healing step for some of the injustices of the past, and that ultimately it united our nation as we move forward, then I think that would be a good thing for all Australians.

Like Loading...
‹ Justice Needs a Hero: Sermon Slides for Elevation Preach on Justice Sunday July 2015
Short Personal Story on the Power of Kindness ›