Home › Australian › Is It Really Disempowering For Me To Call My Daughters Princesses?

Is It Really Disempowering For Me To Call My Daughters Princesses? 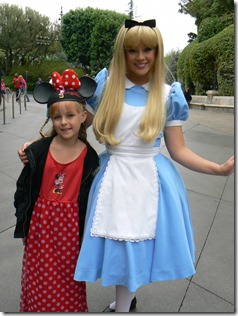 Last week a lady by the name of Van Badham appeared on the Sky News show Contrarians. I thought her conduct was sad seeing she was the only lady on the Panel and it was International Women’s Day. Anyway I struck up a Twitter conversation with her and then another lady joined in. They both turned the conversation around to attack the comment on my Twitter Bio where I say that I am the “Father of Two Princesses”. They accused me of using disempowering language and of being infantile asking the question Wouldn’t I prefer to raise Warriors? Here are some of the tweets. 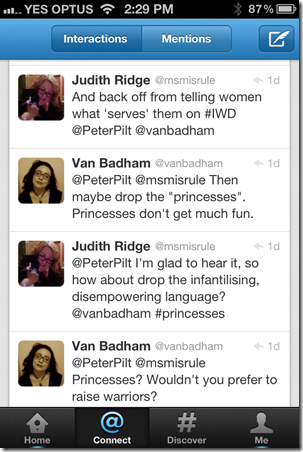 Growing parental concern about young girls being inundated with princess culture is being addressed by Disney, the biggest global purveyor of princess characters on television and film.

The general manager of Disney Junior Worldwide, Nancy Kanter, said the company is unlikely to create another princess being saved by someone ”on a white horse”.

”We know there are people who have their opinions about whether the princess, as a model, is relevant today,” Ms Kanter said, in an exclusive interview with Fairfax before attending the ASTRA television conference in Sydney this week.

So it got me thinking about Princesses. But before I get into that. I think that all little girls want to be thought of as a Princess by their Dads. I think all daughters need to be told they are precious, they are beautiful and they are special. Maybe if more dads treated their daughters like princesses there would be less pain in the world.

But lets talk about Princesses. Are they such a bad role model for my daughters. Here are some inspiring Princesses throughout History

Princess Isabella of France (around the 1300)  – Notable at the time for beauty, diplomatic skills and intelligence

Princess Rani Lakshmi Bai: Rani Lakshmi Bai had two things in common with most Disney princesses: a dead mother and spunk. Lakshmi Bai was born in India in 1835, and her dad worked for a prime minister, so she was raised in a royal setting. But unlike most princess types, Lakshmi Bai wasn’t content to just learn needlework and curtsy etiquette. Instead, she spent her youth studying swordsmanship, archery and how to use guns.

While emotionally recovering from the trauma of losing a husband while also still being a child herself, Rani Lakshmi Bai became a freedom fighter. Her first move was to recruit an army that allowed lady soldiers. Next up, fighting the British! She took her role so seriously that she reportedly went into battle with her adopted son strapped to her back, presumably to drop him off at soccer practice after each fight.

Princess Archidamia: From Sparta: She activated Spartan women into battle and held off invading armies.

Princess Zhao of Pingyang: Lived in the 600’s in China during the Sui Dynasty. During a tumultuous period of Chinese history, Princess Zhao sold her family’s estate and used the money to raise an army to join the rebellion – eventually commanding an army 70,000 strong. The Princess personally led the army to numerous victories. She did all this by the age of 20.

Princess of Wales. Princess of Hearts. Princess Diana. Known for her incredible her for people. Campaigning for better care of AIDS patients in Africa and the banning of the use of Landmines in Asia amongst other things.

Anyway that will do – you get the idea. So I don’t think its such an insulting or disempowering term to call my daughters – Princesses

Father of two Princesses – Signing Off.