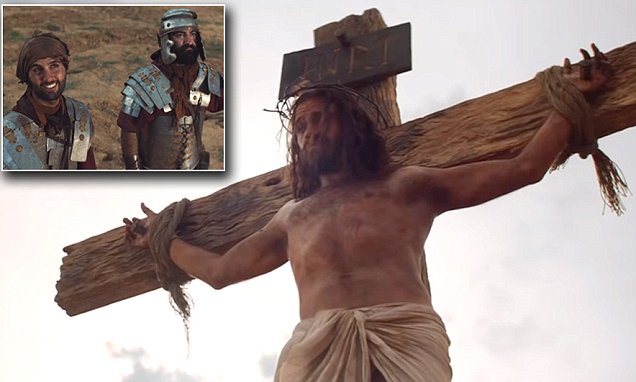 So there is currently an ad campaign running to encourage people to become organ donors by having two Roman soldiers appeal to a dying Jesus to become an organ donor and then when he agrees, they put a smart phone up to his crucified hand to sign the online application form. The ad then finishes off with the soldiers taking a selfie with Christ on the cross.

I was asked what I thought about the ad today and just having viewed it….I thought I would share my thoughts.

First up…let’s look at this purely from a human perspective. Nothing about Christianity. To accost a brutalised man who is in the midst of dying, to donate his organs, surely is not a message the organ donor community want to be associated with.

To then mock a dying man by taking a selfie with him as he is dying is also surely not a message the organ donor community want to be associated with. Surely if these people really want to save the lives of dying people by offering them the organs of others, they would show an immense more sensitivity to the topic of death and dying than what they have done.

I find the ad to be incongruent with the aims of organ donorship. I personally believe death and dying need to be treated with the gravity and respect that they require rather than the insensitive and mocking nature of this ad. Now I get that we are ‘knock about aussies’ and we often deal with tough topics with humor, but there are times and subjects that require dignity and sensitivity. I think that this ad makes light of a dying man’s situation.

I also think it makes a mockery of the consent process. So the organ donor organisation is going to accept the organs of a man who consented to donate, whilst under the tremendous physical, emotional and mental duress of crucifixion, accosted into signing an online consent form, filled out by the two men who brutalised him and put him on the pathway to his death…where apparently his organs are going to ‘save others lives’? Isn’t this called organ harvesting? Is this the message of the ad….we are so desperate for organs in Australia that we will almost kill a man….force him to sign a consent form, take a selfie….then wait till he dies and we can save 7 lives?

All of the above has nothing to do with religion or faith. I just think that the ad is wrong from a human perspective.

Jesus is in the media…that’s a good thing for Christians right? Maybe. In the ad at least the ad writers had Jesus acknowledge his divinity (referencing Joseph as Jesus’ earthly father). Jesus on the cross…maybe that sparks some conversation. Maybe it even gives opportunity for people like me to tell people like you about Jesus and what he did on the cross for you and I.

God used many things in the bible to talk to mankind. A snake and a donkey to mention a couple of things….maybe God could use the two donkeys in this ad to actually speak to people about their need to consider death and their need for a Saviour.

Maybe the issue here is not to champion organ donors but rather to consider blood donors. I have said this many times as I am a regular blood donor and a strong advocate for people to become blood donors, that Jesus was the original blood donor and its through His giving of His blood that we get the gift of salvation. And if I want to push the barrow a little more…..Jesus actually gave all his organs so that we may have life….so He was an organ donor and He was a blood donor, all so you and I can live. The bible says it this way:-

Galatians 1:3-4 3 Grace to you and peace from God the Father and our Lord Jesus Christ, 4 who gave Himself for our sins, that He might deliver us from this present evil age, according to the will of our God and Father, 5 to whom be glory forever and ever. Amen.

So here is the conclusion.

I think the ad is wrong from the perspective of the message that promoters of organ donors want to convey. However we are all talking about it, so maybe it did work.

From a faith perspective, Jesus is both an organ donor and a blood donor and He didn’t just save 7 lives but he saved ‘whosoever will believe in Him will not perish but have everlasting life’….to quote a part of John 3:16

Ps…Become a blood donor. Click here to make an appointment with your local Blood Bank

Like Loading...
‹ The Injustice of ‘Justice’–Guest Blogger Rowanne McKenzie Shares Her Story
Author Of The Message Dies: I Have Several Problems With The Message Paraphrase Version. ›