Home › Australian › Week In Review Morning News Wrap. From Around the Globe to Your Frontal Lobe. 28th January 2019

Week In Review Morning News Wrap. From Around the Globe to Your Frontal Lobe. 28th January 2019

The Morning News Wrap has morphed into a weekly Week in Review. 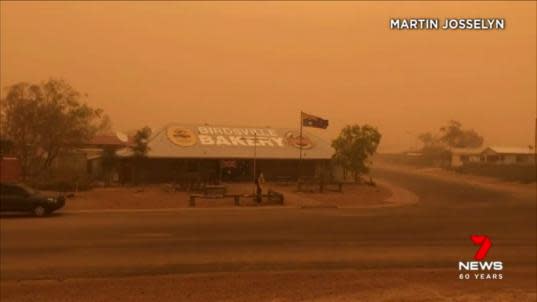 Eerie orange dust cloud sweeps across the town of Birdsville. The Greens Council of Orange are seeing red as orange is Orange’s colour and so are therefore launching a lawsuit which they are hoping will give them some money to put them back in the black. See Pic.

Former Olympian Zali Steggall is confident that she will be able to beat Tony Abbott at the next election as she challenges his Federal seat on two issues:- Same Sex and Climate change….yeah cause they are the two biggest issues apparently facing Australia right now and because you can run really fast that qualifies you to be a politician. Speaking of other people who are good at other things and who thought that that would transfer over to Politics….How did Peter Garrett go?

Queensland’s Daintree River has broken a 118 year old record for flooding. Can’t wait to see what Zali Steggall has to say about record rainfall….you know how Global Warming was going to stop all that….Oh wait we don’t call it Global Warming anymore…we changed it to Climate Change.

Australian Scientist and her sister have been found dead, murdered by her nephew in Argentina.

A Chinese tourist has drowned whilst floating on an air mattress on the Kangaroo Valley river at the popular Bendeela Camp ground. Three other people drowned around Oz over the weekend taking the number of drownings to over 60 since the start of summer. This number is crazy high.

A mother has been asked to leave a public pool on the Central Coast because she was breastfeeding….Now I am a pretty strong advocate on women being allowed to breast feed pretty much anywhere…Click here to read my blog on Boobs. But in this case I side with the pool officials. She was breastfeeding whilst in the actual pool….which then meant that potentially breast milk and or baby vomit could have got into the pool and then compromise other pool users….sorry lady….this is a no go zone. Feed your baby on the edge of the pool if you need to but not whilst in the pool.

Paul Hogan gets political on the Red Carpet…..nope….if he aint saying….Now that’s a knife or Throw another shrimp on the Barbie…..I don’t want to here from him.

You have three more days to opt out of big brother getting all your health records in one place for the Chinese and Russian hackers to gather all the information and sell them to the US Drug Companies. Click here to read my blog on the My Health Record collection.

Ok so let me be brutally honest for a moment. How dumb are music festival goers? There have been many deaths of festival goers over summer due to people taking unidentified drugs….so over the weekend 22 were hospitalised, some with life threatening conditions….one guy was caught with over 600 MDMA tablets. Maybe…now here’s a thought….if you are going to a music festival…..go for the music.

Lots has been happening in Venezuela. Political unrest which the current President is claiming that the US is orchestrating a coup against him….which I find in the midst of a Government Shutdown highly unlikely….and I also have noticed that the politically unstable Venezuela has had less national leaders than Australia has had over the last 12 years. I think we average about one every two years. And looks like we will get another this year…..Oh dear Lord Jesus save us from Prime Minister Bill.

Speaking of the Trump Shutdown….apparently he backed down and so the Government opened back up but he is preparing for a second shutdown. Let’s take a moment and think about all the workers with mortgages or rent and school fees and food to buy, who for weeks have had no income and the money is not made up for them when they go back to work….I imagine if Melanie and I had to go two months without income….that would create some problems for us….well actually more for St.George as they wouldn’t be getting the money they want each week so we can live in their house.

Speaking of the cost of the shutdown. Apparently its cost the economy more than the actually Border Wall would have. The cost to the economy has been $6.5 billion. So they should have just built the wall then?

There is no truth to the rumour that if I was the President of Australia that I would build a wall along the Queensland Border to keep the Southern Mexicans out.

A murdered rapper’s girfriend has just given birth to his baby and named it Gekyume Onfro……Ah I lament the death of names like Tony, Mike and Andrew…. (says the guy with a daughter called Lakeisha).

Still no deal has been worked out for Brexit with the UK PM in trouble. Deep Deep trouble. Her trouble is so deep that they use seismic machines to test her poll data.

A dam has burst in Brazil. Over 300 people are missing and 37 people are confirmed dead.

15 people have been killed and dozens injured after a wall collapsed at a wedding in Peru.

The nation of Spain is in mourning today. A little toddler fell down a well last week and rescuers have been digging frantically to get to the bottom of the well to get him out and when they got there….he had died.

Anyway…that will do for the first of the Weekly Review…..Let me know what you think?

Like Loading...
‹ My Health Record:- A Move Toward an Orwellian Society or Mark of the Beast…or Not?
One Of My Most Creative Preaches: The Heckler ›