An Open Letter to Atheism.

The faith of Atheism has got a fair bit of air play in Australia over the last few weeks with an Atheist’s Conference held in Melbourne last week and a widely viewed and discussed session with the “leader” of the Atheist’s movement Richard Dawkins appearing on Q and A. (A current affairs TV show). So I thought I would write to you in an open letter format to ask you a question.

Now I call Atheism a faith, because Atheism is a belief (without proof) that there is no God. That makes it a faith based belief system. According to the Urban Online Dictionary – An Atheist is a person who believes in the absence of any supreme being or anything regarding the supernatural. Last night in a Twitter conversation I was challenged to prove without doubt that God exists. My challenge back was and is, prove to me without doubt that God doesn’t exist.

The question I have up front is:- Why are Atheists so passionate about destroying Christianity? A report on an Atheist’s rally in Washington on the 25th of March 2012 said the following:

Then Dawkins got to the part where he calls on the crowd not only to challenge religious people but to “ridicule and show contempt” for their doctrines and sacraments, including the Eucharist, which Catholics believe becomes the body of Christ during Mass. 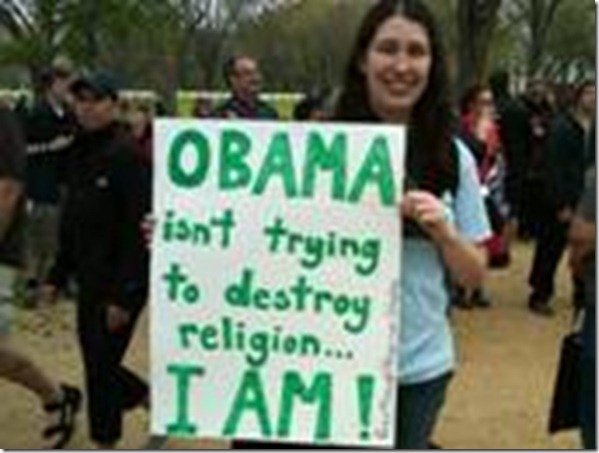 The rally had protest signs like the one above. I guess I am puzzled as I can understand why Christians are passionate about telling Atheists about God, Heaven and Hell. I can’t understand what the aim of Atheism is in wanting to destroy Christianity. I mean, if you genuinely think we are deluded. Let us have our apparent delusion and you get on with life. Now you may say, “Well religion has caused a lot of wars and we want to get rid of religion.” To me it seems that your passion against Christianity is nothing short of declaring a faith based war. David Silverman – American Atheists President has reveled in the group’s reputation as the marines of atheism, as the people who storm the faith barricades of Christianity and bring “unpopular but necessary” lawsuits. Silverman continued his rhetoric at the Washington Rally. In a thundering call for “zero tolerance” for anyone who disagrees with or insults atheism, Silverman proclaimed, “Stand your ground!”

This letter is not aimed at pulling apart your arguments for atheism. This letter is not even about telling you that God loves you and Jesus died for you. This letter is about challenging the aggressive anti Christian posture of Atheism. The level of passion against the faith I stand for really does convince me that you aren’t convinced there is no God.

You are just cranky with Him.

Categories: Current Affairs, Open Letters, Posts with over 1000 hits, Topics to wrestle with