Home › Australian › Great Quotes from Bill Bryson’s Down Under

Great Quotes from Bill Bryson’s Down Under 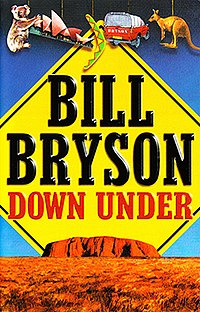 I just finished reading a thoroughly enjoyable and informative book by Bill Bryson called Down Under. Well worth a read. Here are just some of the many notable quotes from the book.

“Australia is mostly empty and a long way away. Its population is small and its role in the world consequently peripheral. It doesn’t have coups, recklessly overfish, arm disagreeable despots, grow coca in provocative quantities, or throw its weight around in a brash and unseemly manner. It is stable and peaceful and good. It doesn’t need watching, and so we don’t. But I will tell you this: the loss is entirely ours.”

“The people are immensely likable— cheerful, extrovert, quick-witted, and unfailingly obliging. Their cities are safe and clean and nearly always built on water. They have a society that is prosperous, well ordered, and instinctively egalitarian. The food is excellent. The beer is cold. The sun nearly always shines. There is coffee on every corner. Life doesn’t get much better than this.”

“Australians are very unfair in this way. They spend half of any conversation insisting that the country’s dangers are vastly overrated and that there’s nothing to worry about, and the other half telling you how six months ago their Uncle Bob was driving to Mudgee when a tiger snake slid out from under the dashboard and bit him on the groin, but that it’s okay now because he’s off the life support machine and they’ve discovered he can communicate with eye blinks.”

“As many of you already know, the Brits sent their convicts to Australia in the late eighteenth century. While the voyage took 252 days they were lucky – upon landing, the Brits spotted two French ships in the horizon. Meaning, had they taken a day longer to arrive, Australia would have been a French colony”

“I passed the time on the long flight reading a history of Australian politics in the twentieth century, wherein I encountered the startling fact that in 1967 the prime minister, Harold Holt, was strolling along a beach in Victoria when he plunged into the surf and vanished. No trace of the poor man was ever seen again. This seemed doubly astounding to me—first that Australia could just lose a prime minster (I mean, come on) and second that news of this had never reached me.”

“Lachlan Macquarie, the Scottish governor of the colony in the beginning of the nineteenth century, was nearly successful at attempting to name every object in the continent after himself. As a result, there is the Macquarie Harbour, Macquarie Island, Macquarie Marsh, Macquarie River, Macquarie Fields, Macquarie Pass, Macquarie’s Chair, Macquarie’s Point and a Macquarie town. Macquarie is also a bank, university, the national dictionary, a shopping centre, an ice rink, and countless roads, streets and avenues. And that doesn’t even include all the places named after his first name Lachlan…”

‘In 1857, naturalist Gerard Krefft caught two very rare pig-footed Bandicoots in the outback. Unfortunately, Krefft grew hungry and ate them. As far as anyone could tell – they were the last of their species””

“Charles Kingsford Smith was the greatest Australian aviator (possibly the best aviator in the world) and held more records than anyone else. Despite this, after his death in 1935, he was notably remembered in Australia (the Sydney airport is named after him) but not abroad. For instance, in 1998, the American writer Scott Berg wrote a six hundred page book on the history of aviation history – there was no single mention of Charles Kingford Smith”

“In the morning a new man was behind the front desk. “And how did you enjoy your stay, Sir?” he asked smoothly.
“It was singularly execrable,” I replied.
“Oh, excellent,” he purred, taking my card
“In fact, I would go so far as to say that the principal value of a stay in this establishment is that it is bound to make all subsequent service-related experiences seem, in comparison, refreshing.”
He made a deeply appreciative expression as if to say, “Praise indeed,” and presnted my bill for signature. “Well, we hope you’ll come again.”
“I would sooner have bowel surgery in the woods with a a stick.”
His expression wavered, then held there for a long moment. “Excellent,” he said again, but without a great show of conviction.”

“No one knows, incidentally, why Australia’s spiders are so extravagantly toxic; capturing small insects and injecting them with enough poison to drop a horse would appear to be the most literal case of overkill. Still, it does mean that everyone gives them lots of space.”

Its a definite recommendation from me.

If this Blog has been helpful, informative or inspirational to you, please feel free to share it on Social Media. Email Subscriptions to my blog are welcome or you can contact me through Facebook (facebook.com/peterpilt),  Twitter (@PeterPilt) or Insta (@PeterPilt). Have a great day.

For the record my personal email address is ppilt@ozemail.com.au I love connecting with people. Email me if you would like.

Like Loading...
‹ My 44th Birthday Musings.
Father’s Day 2013–A Photo Blog of Some of my Favourite Dad/Daughter Photos ›