Home › Nowra City Church › If I Were The Devil, How I Would Sell Hell To Humanity!

If I Were The Devil, How I Would Sell Hell To Humanity!

The Devil is the best salesman in the world. 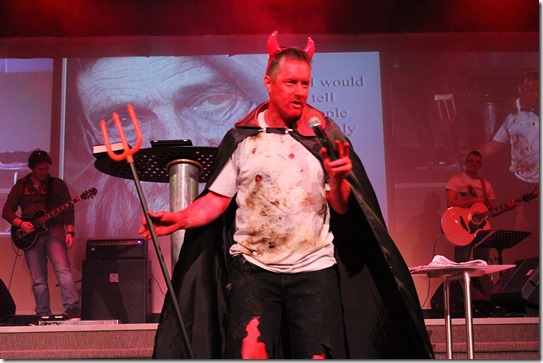 I once had a job selling computers for a Wollongong Company called Computer Things. I really did suck at it. Selling can be a tough gig. It can be made even tougher if what you are selling is just plain horrible. Imagine you had to sell the benefits of eternal punishment in a lake of fire and brimstone to people and make them excited about going there. Tough gig  indeed.

So it got me thinking. How has the Devil sold the concept of Hell to humanity such that people are happy to choose to go there?

Then I really got thinking and I asked myself question: If I was the devil, how would I sell Hell to Humanity?

Lets start off talking about the product I have to sell. I Googled Hell and got this description:-

Try to imagine you body with the most excruciating sunburn. Add to that the awful pain of your whole frame scalded with boiling water. To this, add the agony of bodily movement. The skin stretches. Untold daggers of pain flash through your body. You want to hold still, but the burning from the flames will not allow it. The bubbling brimstone makes you scream. Your hair is on fire. Your feet and hands blister, while you gnaw your tongue, trying to relieve the torment. “Your throat is raw from screaming and wailing. Spasms of anguish drop you into the molten lava. You go under the surface gnashing your teeth. The burning brimstone flows into your mouth; runs down your throat and into your stomach. You are on fire INSIDE and OUTSIDE

That’s a tough product to move…..

Now lets establish what the bible says about Hell

Why then do we have most of humanity rejecting the only pathway out of Hell – Jesus Christ?

Logic would dictate that if Hell is the greatest horror and Jesus is a means of escape – then churches should be packed out every Sunday with people getting saved.

Somewhere along the line – people have been convinced by the super salesman, the Devil, that Hell is not so bad.

So if I was the devil – how would I sell hell to humanity so lots of people would come and burn in torment for eternity with me?

Here are my top 9 Strategies:

1. I would want to establish my credibility to sell Hell as a good place.

So I would make out that I am the boss of Hell. I would get people to think that I actually am in charge of Hell.

The fact that God is the boss and the eternal judge – I would hide that fact very well. I would infiltrate pop culture with the lie that I am the boss of Hell, thus being a credible source of information on Hell. 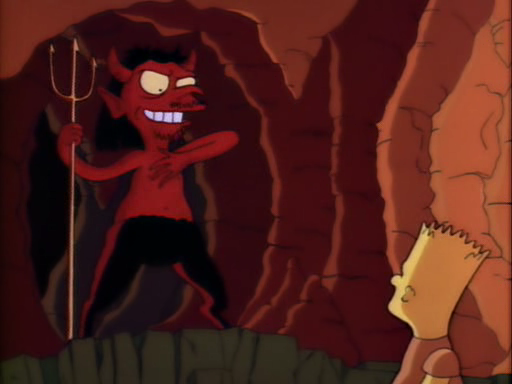 2. I would tell everyone – Heaven is boring and Hell is a big party

I would get people to think that heaven is one big long eternal church service and that all you do is walk around all day on clouds and play harps…….so boring.

In contrast I would help people think that Hell is one big party….an open tab bar or a golf course or anything that makes their precious little hearts smile.

To sum up I would make people think they can go to Heaven and be boring or go to Hell and PARTAE with all their friends.

Mark Twain once said – “Go to heaven for the climate, Hell for the company”

In the ACDC song Highway to Hell, the band express their excitement about going to Hell. They are excellent sales assistants.

3. I would sell the concept that a loving God would not send you to hell.

Master Stroke of genius this one. Every noticed that at a funeral way too many ministers, chaplains or celebrants indicate that the person who is deceased is in heaven….regardless of the fact that they never attended church nor were a person of faith. See if I was the Devil, I would get people to think that a loving God would never send ANYONE to a place as horrible as Hell, so you don’t need to worry about all this ‘religious’ stuff like Jesus, Grace, Repentance and Forgiveness. You’ll be right.

4. I would make it seem like there are a whole stack of ways to get to heaven – even though there is really only one

I would start my own religion. I have a few going at the moment. And then I would make a post modern generation reject the idea that Jesus is THE way, THE truth and THE life: and then accuse Christians of being supremely arrogant by claiming they have the only way to heaven. Like this clip indicates from the Oprah Winfrey

I would also convince people that they can get to heaven by works….knock on enough doors, live morally right etc and you will get in. I would do anything to keep people away from Jesus.

5. If I was the Devil I would make the word Hell a part of normal language

6. I would make it the butt of jokes

Bill Gates met God, and God said, “Well, Bill, I’m really confused on this one. I’m not sure whether to send you to Heaven or to Hell. After all, you enormously helped society by putting a computer in almost every home in the world, and yet you created that ghastly Windows. I’m going to do something I’ve never done before. I’m going to let you decide where you want to go.”

Bill Gates said, “What’s the difference between the two?”

God said, “It might help you decide if you took a peek at both places. Shall we look at Hell first?”
Bill was amazed. He saw a clean, white sandy beach with clear waters. There were thousands of beautiful men and women running around, playing in the water, laughing and frolicking about. The sun was shining and the temperature was perfect. “This is great!” said Bill. “If this is Hell, I can’t wait to see Heaven.”
God said, “Let’s go!” and off they went to Heaven.

Bill saw puffy white clouds in a beautiful blue sky, with angels drifting about playing harps and singing. It was nice, but surely not as enticing as Hell. Bill thought for only a brief moment and rendered his decision. “God, I do believe I would prefer to go to Hell.”

Two weeks later, God decided to check up on the late billionaire to see how things were going. He found Bill shackled to a wall, screaming amidst the hot flames in a dark cave. He was being tortured by demons with pitchforks. “How ya doin’, Bill?” asked God.

Bill responded with anguish and despair, “This is awful! This is not what I expected at all! What happened to the beach and the beautiful women playing in the water?”

7. I would make it so that it seems like it is way too much hard work to get to heaven

8. I would tell everyone that they have plenty of time to get prepared for death because only the really really old people die

Reality is you have nothing to worry about till you are 98. Up until that age, party it up, don’t think about death and when you see on the news that a young person was killed in a car accident, just pack that away in the back of your brain and just assume that it’s always other people who die young and you have all the time in the world. Don’t prepare for death in any way even though it’s an inevitable part of living…If I was the Devil, I would convince people that they have all the time in the world.

If I was the Devil I would be so good at selling Hell that I would even get preachers like Rob Bell to put out a book called Love Wins, that basically says Hell doesn’t exist. Forget the fact that there are over 160 references in the New Testament to Hell and over 70 of these are the words of Jesus. If you don’t think it exists you don’t need to do anything to escape it clutches like throw yourself on the mercy and grace of God.

Reality is, the Devil is unfortunately a very deceptive and false purveyor of Heaven and Hell. Humanity seems to have been taken in by his strategies. John 3:16 says that God so loved the world that He gave His only son that whosoever believes in Him, will not perish but have everlasting life.

Hell is real. Heaven is real. Faith in Jesus is the only way to escape Hell.

Like Loading...
‹ “Sometimes There Aren’t Enough Rocks” Wisdom For Those Hurting and Carrying Deep Emotional Pain.
I Doubted I Would Ever Write A Blog About Periods…..But Here It Is. ›

Tags: global care, Heaven, Hell, How do I escape Hell, How do I go to Heaven, How does the devil sell Hell to Humanity, If I was the Devil, is Heaven real, Is Hell real, Peter Pilt on Heaven and Hell, Ps Peter Pilt, Why do people want to go to Hell?