Homelessness in Australia–My research and thoughts.

The issue of homelessness is Australia is a strong statement of the failure of our nation collectively to look after those who are often the most vulnerable of Australians. This week is National Homeless Persons Week – 6th to the 12th of August 2012. I have been doing some reading on the issues and on some broader issues related to homelessness. Here is summary of my research mixed with some of my thoughts:-

I attended a rally in July of 2011 on homelessness and the speakers were people who a had been homeless in the past. One of the things that they said that deeply impacted me is they said, when you are homeless, you feel invisible because no one will make eye contact with you. And so you can go through the whole day surrounded by people but no one looks at you and no one acknowledges your presence.

WOW. From that day on, every homeless person I see on the streets, I acknowledge. I say hello to them and smile at them. I may not be able to impact their situation. But I can warm their heart and let them know that they are not invisible.

In 1996  according to the Australian Bureau of Statistics, there were 99,900 people homeless.

In 2006 that number had grown to 118,000 people. That is an increase of 18,100 or 35 Australians are made homeless every week. Considering those who in that period found accommodation, the actual number of new people struggling with homelessness would be substantially more than that. But based on the 18,100 people, thats 5 new people everyday. This is such a sad statistic.

In the 3 months leading up to September 2011 more than 91,000 Australians seeking assistance from specialist homeless services. One in five of those people were aged under ten.

There is more to homelessness than rooflessness. Other issues to consider:-

There are three different levels of defining homelessness

Of the people who are homeless in the Illawarra and Shoalhaven, this is the breakup:-

Some of the major cause of homelessness:

Aboriginal people are an overly represented people group amongst the homeless.

Often in discussions related to homelessness we don’t bring into the equation some of the significant culture ills that plague Australian society.

In 1977, Lionel Murphy QC pushed to have a no fault quickie divorce come into law. Over the last 40 years, the commitment that couples make to each other at the marriage alter has become something of national joke. Additionally, the constant breakdown of marriage has resulted in a significant increase in defacto relationships. It is my opinion, that as society reduces the sanctity of marriage and the strength of traditional families, there is an increase in homelessness as marriages and families breakdown. The pain that this causes is beyond words. Why does no one in the homelessness debate bring this up.

In February of this year, I walked down Skid Row in LA. Here is my blog of the experience. I was deeply impacted by the few hours I was there. 6500 people living on the streets within a 5 block radius. Over 1000 register sex offenders live there too. Imagine the issues with child sexual assault. 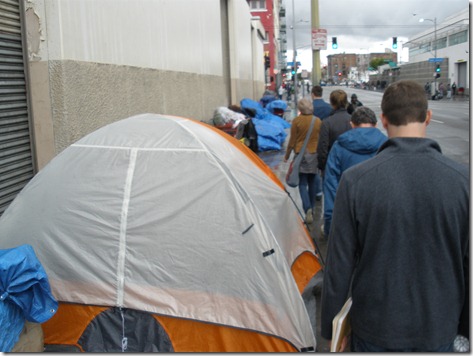 In July of 2011, I was involved in the St Vincent De Paul CEO Sleepout. This involved me sleeping out on the streets of Sydney in the middle of winter. Now whilst I dont think that that even comes close to reality for homeless people, it certainly gave me a bit of an idea of what is like in winter in Sydney for someone that is not sleeping with a roof over their head.

If this Blog has been helpful to you, please feel free to share it on Facebook or Twitter. Email Subscriptions to my blog are welcome. Have a great day.