Peter Pilt’s Review of His Family Holiday In Phuket.

I have just spent 14 nights in Phuket with my wife and two daughters. Over the last 10 years, this is the third time that I have been to Phuket. Here are my tips, stories and advice to help you should you be planning a trip to this part of the world. And let me say that clearly as I have been there three times I must be a bit of a fan. (See fan pic below). You may also be interested to read about my Top 10 International Travel Tips Blog. Click here to read it.

You may also want to read my review of my Holiday in Bali. 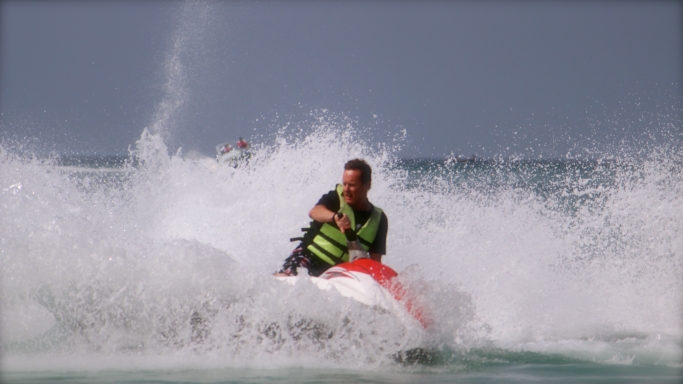 First up, this time we were there it was noticeably quieter than the previous two times. This was surprising as we were there for Christmas/New Year which is peak tourist season. Apparently the Thai Military had closed down a few things like lounges on the beach and the beachside markets. Not sure if this is the reason but certainly noticed there were less people over all and even more noticeable was the lack of Australians around. This despite the Jetstar flight on the way over being jammed packed full. From what some of the tour operators told us, the number one country of origin of tourists now are Russians. ( I certainly noticed their presence). They said that Australians are increasingly not coming to Phuket. They did not offer any reasons for that.

Accommodation wise we have stayed for each visit at Graceland Resort on Patong beach. We love it there. It’s not a 5 star luxury resort, but it’s very nice, has an amazing pool and it’s right over the road from Patong Beach. Its also a short 20 minute walk right into the main shopping action of the Patong Beach Shopping district. I certainly recommend it. Here are a couple of pics.

Here are a couple of Pics. (not all from the latest visit). 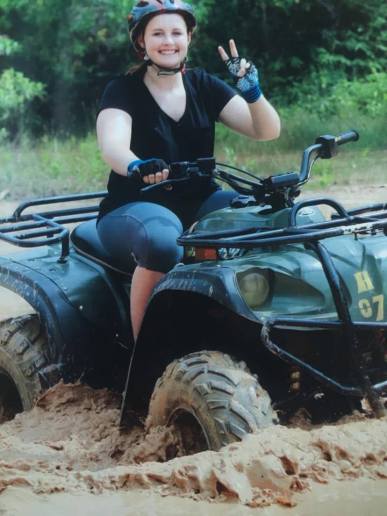 We have found all the tours to be operated professionally and with on time pick ups etc.

My daughter Lakeisha and her boyfriend Thomas booked an hour ATV tour with a 30 minute horse ride on the beach, during this current visit. The ATV tyres were so bald the vehicle was unsafe in any terrain. (See Pic below). The one hour ride went for 20 minutes. Then they got on the horses and the horse Thomas was on was uncontrollable and so they gave up on the ride.

So they go the tour operators to make a note on their receipt and I took the receipt back to the street tour operator and ask for the return of 2000 of the 3000 baht they had paid for the tour. There was some toing and froing and it did get a little heated but I walked away with the 2000 Baht which I thought was fair all round.

Getting around Patong is pretty much via Tuk Tuk. This is an open backed small vehicle that can hold up to six people. Some of the Tuk Tuks are fitted out with neon lights, music and even at times music video screens. See Pics below. Whether they are fitted out or not doesn’t seem to impact the price. It also seems that 200 Baht (approximately $8 AUD) is the minimum price to go anywhere from 500 metres to 5 kms and after that the price you pay will depend on your bargaining power. 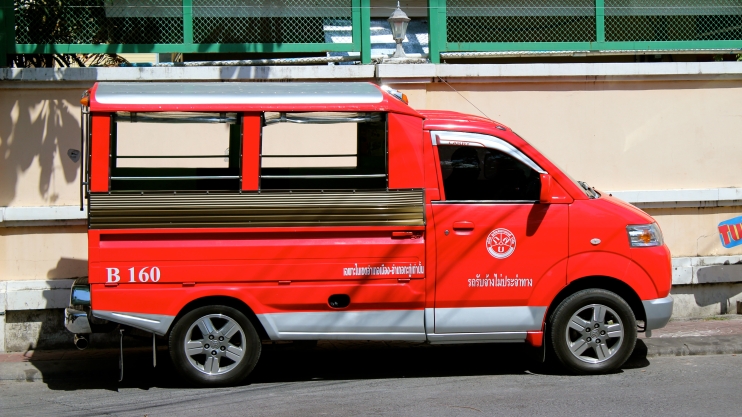 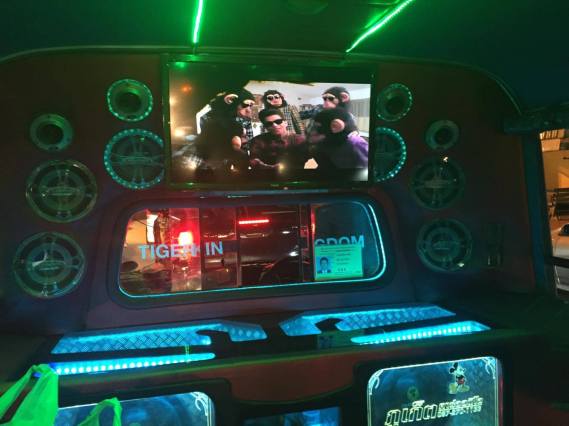 Talking of bargaining power there was a rumour going around a few years ago that tough bargainers are given different colour shopping bags so business owners know who are the easy pickings and who aren’t. I have experimented with this and paid a market stall owner his opening asking price and then I went next door and bought exactly the same three shirts for about one third of the price…..and I got the same coloured bag. So my deeply scientific empirical research proves this theory to be a myth. (Just like evolution and climate change:- relax I just put that in to bait you) Anyway forget that, keep reading.

Patong Beach is an amazing beach. I love the natural beauty, the warmth of the water, the atmosphere and the people you meet. When we were there previously you could pay 200 baht for basically two comfortable banana lounges covered by several sun umbrellas. It was a very nice way to spend a day on the beach. Apparently the Thai military closed all that down. However for 200 baht during this visit, we could hire a thin camping mattress laid on the sand with the Umbrellas. It really wasn’t the same. First world problems I know but it’s my review and I’ll cry if I want to (quoting that song about the party thing and if you aren’t sure about that then just move on). Anyway keep reading. Here are some Pics of the beach. 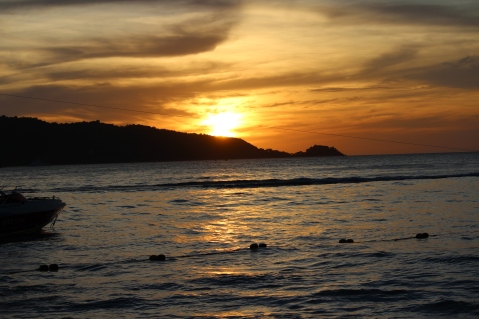 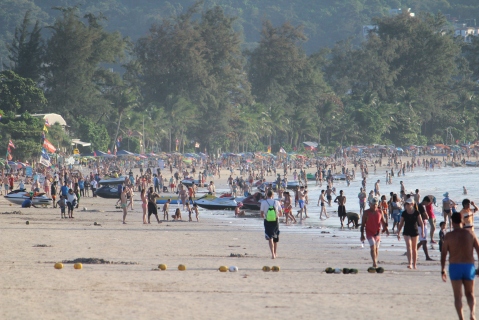 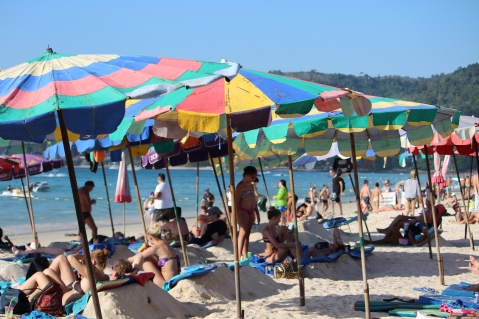 I enjoyed the beach vendors that would come and try and flog you timber whistles, dresses, massages, tattoos etc. The Pilt family love interacting and doing business with these people and some became friends that we would have daily conversations with. I am all for enjoying the experience and I would much prefer to give my business to a one man (or woman) micro business than going across the road to the Seven 11. 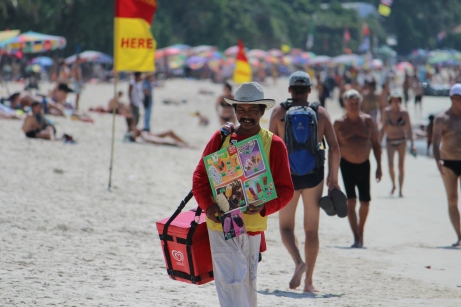 Safety is always a consideration when going overseas and certainly if you listen to the media and then look at the DFAT (Department of Foreign Affairs and Trade) website for their travel advisory warnings YOU MAY FREAK OUT. The Media, (God bless the media) carried a story (three days before we were about to leave)  that there was a Russian Terrorist operating in Phuket over the Christmas/New Year Period and DFAT were saying that Phuket carried significant warning for tourists travelling there. I now am taking my wife and children there (well don’t I suck as a dad?).

In addition to all of the above safety issues I have seen the ‘tourist training videos’ Taken, Taken 2 and just when you thought it was safe to travel to Europe again Taken 3. The problem is like Liam Neeson, I too have daughters but unlike Liam I do not have ‘the required set of skills’ to find the bad guys and to kill them. (If you haven’t seen the movies Taken, what have you been doing with your life? Here is a quick summary(of the original and best movie (but not best because of it’s topic but best in terms of the action)): Neeson’s daughter goes to Paris, gets ‘Taken’ by people smugglers who then sell her into sex slavery but Neeson saves her just after the slavery auction and all ends well although many many people die but they are all apparently bad guys so as a movie goer you feel good about seeing them be shot although Neeson never actually stops to ask any of them are they really bad guys or are they just pawns in a bad system and they are actually good fathers and husbands who are just so desperately poor in a poverty strapped former Eastern Bloc country (Albania) that they are doing all they can to feed their family?) Well that escalated quickly.

Ok Let’s move on. Suffice to say that I felt safe and I was happy to let Lakeisha (nearly 18 yr old daughter) walk up the street alone (but only during the day) and I told her not to take a Tuk Tuk by herself.

And we had no encounters with any Russian Terrorists.

In regards to currency and the best way to access that – never ever use the currency converters at the International Terminal (assuming you are flying out of Australia). They will give you a shockingly poor conversion rate. I have always found the best option is to get cash from an ATM in the country you are going too. I was a bit shocked at the 200 Baht ($8 AUD) ATM fee for each transaction – so we took out larger amounts so that we didn’t incur this fee too often. I was also disappointed to see that St George Bank then charged me a ‘Currency Conversion Fee’ which for a withdrawal of 10,000 Baht ($400 AUD) was $17 AUD. So to take out $400 AUD it ultimately cost me $25 – still think it was cheaper than Travelex at Sydney Airport.

So that’s about it. We have had three great holidays in Phuket and its a great place. I doubt there will be a fourth holiday there, not because we don’t love the place but because there are other places to travel to and discover.

If you have any specific questions about Phuket my personal email is ppilt@ozemail.com.au.

Tags: Graceland, Graceland Phuket, Is Phuket Safe, Patong Beach, Patong holiday review, Peter Pilt, Peter Pilt on Phuket, Phuket, Should I go to Phuket, What should I do in Phuket