Home › Australian › Here Is The Reason Why Australians Are Sceptical About The Immigration Processes Of Australia. But Hey!!!! How Dare Anyone Ask The Obvious Question?

Here Is The Reason Why Australians Are Sceptical About The Immigration Processes Of Australia. But Hey!!!! How Dare Anyone Ask The Obvious Question? 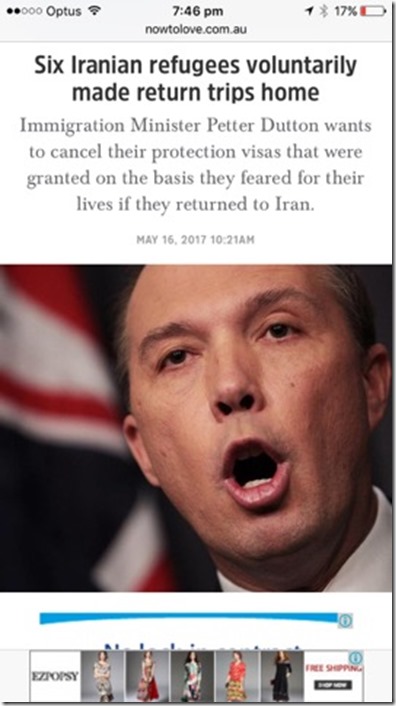 Here is the reason why Australians are sceptical about the Immigration processes of Australia and therefore deeply suspicious of Muslims.

Today the news media carried the story of 6 Iranian Immigrants who claimed homeland persecution as the reason for them claiming refugee status in Australia….which they were granted….They then went back to said ‘apparently persecuting homeland’ for a holiday…

Wait up…..in the place where they were apparently fearing for their life to the level that another nation would open their borders and welcome them in right?

Does any one else feel mocked?

Or even just a little sceptical?

Or wondering if we are being played?

And then the Immigration Minister in the Turnbull Government (Peter Dutton) expressed outrage but couldn’t do a thing (really…I guess being in the FEDERAL GOVERNMENT IS TOTALLY DISEMPOWERING)….which makes me wonder who is actually in charge of Australia’s borders…..Public Servants? Clearly not the Government….(Oh where is a Howard when you need him?). And yeah all the Howard haters can just unfriend me and go to the nearest International Airport and stand at the Exit and welcome back the persecuted refugees once they have returned from their holiday from the land where they feared for their life.

So how is this not reflective of the whole ‘Yes Minister’ concept? (you have to be over 35 to get that).

On the Channel Ten News tonight, they carried this story and also talked about the alarming number of Visas that are rejected by the Department of Immigration, that are then over turned on appeal.

So it again begs the question….who controls the borders of our nation? Public Servants? The Appeals Tribunal? Clearly the Government doesn’t.

And who is on the appeals tribune?

And how do you get on the appeals tribunal?

I bet you have to be Muslim to even be considered?

Maybe it doesn’t? Maybe you are I are just being played.

Holidaying in Iran….when you have said the persecution in your homeland is the reason you are seeking (and being granted refugee status)…..doesn’t seem to be the smart thing to do….

Oh unless you seriously think you can give the bird to our nation as you cry out Allahu Akbar. Oh wait….Yes you can.

Do you ever wonder why we are so dumb as a nation……?

Tags: Australia gets screwed by holidaying Iranians, Here Is The Reason Why Australians Are Sceptical About The Immigration Processes Of Australia. But Hey!!!! How Dare Anyone Ask The Obvious Question?, Iranian refugees, Iranians, Muslims don't respect Australia's borders, Peter Dutton, Who controls Australia's borders