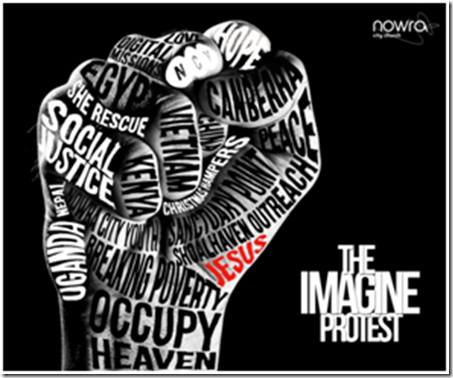 On the 20th May 2012, Nowra City Church will be holding Imagine Protest 2012. This is where the church takes up its annual Missions Offering. We are calling it the Imagine Protest this year as:- The definition of a Protest is:

A statement or action expressing disapproval of or objection to something.

We the people of Nowra City Church, are going to  protest against the following things that we have an objection to:-

Slum in Kathmandu, Nepal. Ps Peter, when he was in Nepal in November 2011, walked through a slum in Kathmandu, where there is no fresh water and raw sewerage flows openly between the dwellings. Now Nowra City Church does not have the resources to rehouse the entire slum, but we can and we will pay for a fresh water source and the installation of sanitation. If finances allowed for it, the plan is to also install showers for public use.

The Breaking of Generational Poverty in Vietnam. One pig given to an impoverished family in Vietnam, can radically change the financial situation for that family. Through this microenterprise, families are better fed, often better housed, their status within the Village can be increased and the children can be educated. One Pig costs $100. This includes animal husbandry training for the family and basic business training. It also includes Artificial Insemination for the pig at 6 months

In July of this year, we have a team of Tradesman from Nowra City Church going over to Denang to build a Pigsty in a welfare institution. (Totally financed by the team who are going) This institution gets from the Communist Government, 20cents per person per day for a food budget. This pigsty will give them an income source and a food source.The building materials etc have been financed from last year’s Imagine Offering. Once it’s built we want to buy pigs to stock the sty.

Uganda. Irene Gleeson’s ministry does an amazing job at housing Orphans and educating and feeding them. These are children who have lost their parents through the brutal civil war being waged by Joseph Kony’s LRA. We will again help finance her ministry in this troubled country.

China. We are unable to make our strategy clear here due to the sensitivities of the Chinese Government. However we are working at reaching the unreached people groups of North West China.

Social Justice Co-ordination in Australia. In Ps Peter’s role as Social Justice Co-ordinator for the Christian Outreach Centre Movement, he has been instrumental in establishing a Operations Board, a 5 year strategic plan and a crisis response team. Additionally over the last few years, disaster response capabilities have been significant increased and have been put in operation in Kinglake, the Queensland Floods in 2011 and again in 2012. Christian Outreach Centre has also stepped up its Political Voice, through its involvement with the Australian Christian Lobby. A small amount of money is allocated from the Imagine Offering to assist in covering some of the costs associated with the co-ordination of COC’s Social Justice Arm.

Sanctuary Point Youth. Recently at a meeting of School Principals from the Sanctuary Point area, a remark was made that since Nowra City Church have been running a youth outreach down in the area, the atmosphere in the town has changed. This is what Sanga Youth is all about. Making a difference in the lives of the youth community out there. Many young people have given their hearts to Christ and are now on fire for Jesus

Nowra City Youth. Over the last two years, the Youth Ministry of this church has grown to about 300 people. How amazing is that. In one weekend last year, 59 people got saved through Nowra City Youth. Simon and the Team are kicking some major goals and the heart of the leadership of the church, is that we continue to finance them as they continue to bring in the harvest for the Kingdom of God.

Cambodia. The incredible work of SHE Rescue Home in rescuing and restoring, young ladies lives who have been sold into the child sex trade in Phnom Penh, continues to be part of the Imagine Offering support areas. These girls, from the ages of 6 to 16, deserve a childhood and do not deserve to be raped multiple times a night by Western Men. We are Protesting against human trafficking. Its not OK!

Digital Missions. This year the strategy of preaching Christ through Digital Missions has yielded much fruit. People have been saved, others built into churches, others have been discipled and helped in their walk with God. Additionally we have up to 25 people, across the three services each week, watching via live streaming – a figure that continues to grow. Also through Blogging, Podcasts, Youtube and the website, Nowra City Church is able to influence many for the Kingdom.

Monash. Our Monash campus is starting to grow. Recently we had a record attendance and the two weeks before we had 4 people saved. As leadership from NCC goes down there most weeks, a small amount of Imagine offering money will be allocated to cover the costs of this.  This is a strategic and significant opportunity for Nowra City Church to help grow a church in the Nation’s Capital.

Local Area Outreach. Obviously one of the big areas that the church focuses on is winning people to Christ in the local area. This is done throughout the year, through events, resources, outreaches etc. Some money from the Imagine Offering is allocated each year to help finance these and every year, people get saved and have their eternal destiny’s changed.

Egypt. The situation in Egypt post President Mubarak has become very hostile. The persecution of Christians has become a daily event. Ps Peter in his contact with the Senior Pastor of the COC church in Cairo, hears first hand accounts of some of the things that are going on. Last year some money was given to Ps Fakoury, to assist him in co-ordinating the various denominations, to raise up a Christian Political Voice.  Ps Peter feels that at this stage, we need to continue to resource Ps Fakoury and support him with faith filled prayers. A nation hangs in the balance.

Other Areas. Obviously depending on the amount of the Imagine Protest giving, there are other areas that we could be involved in. Brazil, India and Indonesia are three countries that we were involved in through Imagine Offering 2011, that we could continue the work that we financed last year.

Through the Imagine Protest, we can make a statement.

The Imagine Protest is not only open to Nowra City Church – but to others as well. If you would like to get involved, email me at peter@nowracitychurch.com.au

Like Loading...
‹ 10 Things that concern me about the Federal Budget.
An Alarming Article on the State of Australia’s Nation Debt by Ross Greenwood. ›