Today the nation of Australia has awoken to the sad news that people have been killed and injured as the siege in Martin Place ended at 2:10am. This blog contains seven thoughts about the siege.

First I will share what has now become an iconic image from the siege. Most of the major Australian Newspapers have carried this image on their front page. 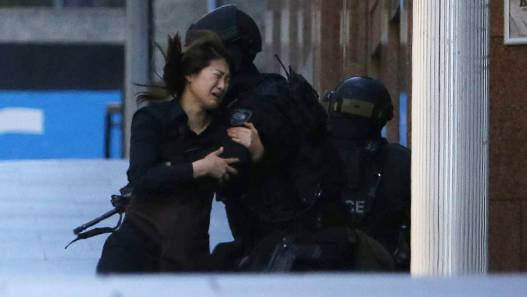 Firstly the details as we know of them this morning.

1) Our nation’s leaders have made comment after comment that this will not change us. I understand the perspective but I hope it changes us but not for the worse. What if this was a sad incident that changes the fabric of our society for the better.  A Facebook friend of mine Linda Burns posted this story earlier today and it resonated with my thoughts.

Taken from another FB page my son shared with me & I thought it well said.
I just caught a train home through the central Sydney line. The mood was very different to my usual Monday afternoon trip home. Less people were looking down at their phones. As you walked past complete strangers they gave you a little nod and a smile. As I got off at central station I saw two grown men in suits run into each other, they obviously knew one and other. They gave each other a manly hug and asked “how ya goin?”… they both responded with “Yeah… shit day but good, I’m going good mate.” I realised on my trip home that terrorism WILL NEVER work in Australia. We are not scared. We are not terrorised. We are gravely concerned about our brothers and sisters in that coffee shop. But you will not win. You will never be able to tear apart this nation. Why? Because we have a weapon stronger than yours.
Stronger than your religious beliefs, stronger than your hatred, stronger than your pathetic fear mongering, stronger than your misguided violence, stronger than you. We are Australians and we have a secret weapon you will never have or understand…mateship. We are a nation of mates who will never be broken by the actions of a cowardice few.
What I realised on the way home was that in your attempt to scare our nation you have galvanised our mateship.
You failed.

What if we as a nation became better mates?

Yesterday as the siege was unfolding I was conducting a funeral on the Gold Coast. At the end of the funeral I talked about the fact that at a funeral we speak so well of the dead person but often in life we fail to express our love and affection for the people in our world. I challenged the attendees to become more expressive of their love and appreciation for those around them.

Maybe we could return to good old fashion courtesy and manners to people we don’t even know. A hello or a good morning to the person we buy coffee from. A good afternoon to the petrol console operator. A friendly greeting to our fellow shoppers.

I hope that as we are united in our grief this morning, we look around at our common humanity and become a friendlier nation. I hope that what was meant to divide us, unites us.

I hope that this Christmas it’s less about getting the latest iPhone and more about the time we spend with love ones.

I hope we feel a tremendous sense of gratitude for the message of hope that Christmas is.

2) Calling now for all Muslims to be sent home and extremist views on Asylum seekers etc etc has no place in the post siege discussion. Reality is that as a Christian one of the things I love about Australia is that I have religious freedom. I can go to church, any church that I want. I can use a hymn book or I can go to a Hillsong style church. Our freedoms are awesome. As part of that religious freedom, I can also attend a Mosque and believe the Qu’ran. Freedom is only freedom if indeed there is choice:- And there is in Australia and that’s awesome. Now as a Christian I am not saying all ways lead to God or Heaven. Rather I would love to see all Australians choose a relationship with Jesus, the key word here is choose. What makes us humans is the gift that God gave us of choice.

3) Having said the above point I do think we need to look at what elements in our society  are leading to an environment that is conducive to the radicalisation of young Muslims.

4) We also need to look at the bail system that allows a man with a string of convictions, who is well known to the police as a radical, to walk the streets carrying firearms. I think of the murder of Jill Meagher in Melbourne by a man who was on bail. This system needs an overhaul.

5) It was good to see the leaders of the Australian Muslim Community coming out and strongly condemning the attack yesterday. Extremists don’t represent all of the Muslim Community: however at times I have been frustrated at the silence of Islamic leaders when extremist or radicalised behaviours are witnessed. For instance, the silence of Muslim leaders as a significant number of Australian young men have gone to Iraq and Syria to fight with ISIL has made a very loud statement. So good for them on coming out strongly yesterday.

6) I was saddened to see the behaviour of some of the crowd watching the siege. Some sat there drinking beer like they were at a footy match: whilst people’s lives hung in the balance. Others were taking selfies. Clearly some people need to think about the gravity of the situation before acting with such abandon.

This is my prayer:

To the One True God of Heaven, Elohim,

Our nation hurts this morning. Presence yourself with us and bring comfort to those who mourn, healing to those injured and peace to those who now fear. Allow the tragic events of the last 24 hours to change us as a nation for the better. May your message of hope eternal through the birth of Jesus in a manger, become a strong thematic for everyone over this Christmas season. Almighty God we pray for wisdom for our Civic, State and Federal leaders. Guide them over this next period of time as they think and strategise the way forward. We hold up to you the Muslim Community in Australia: they esteem Jesus as a prophet, may they also know him as their saviour.

Bless Australia and her people in the name of Jesus Christ

Like Loading...
‹ I Can’t Breathe: Powerful Images Surrounding the Eric Garner Murder and Subsequent Protests.
What if God was like Scrooge? How would Christmas and Salvation be different? ›